While we're on the subject... 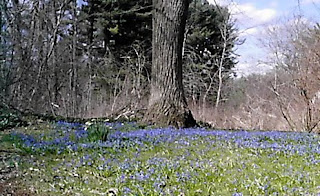 Doubt and Faith
A month ago there were patches of
stubborn snow under the blackberry bushes
and the grass was still last year’s,
dead and brown. Now, though, oh now!
Every bare branch is budded, every
blade of grass new green, every breeze
a sigh from heaven. How could I have
doubted spring? The blackberry’s faith
is greater than mine.
Posted by Pauline at 3:47 AM 11 comments: 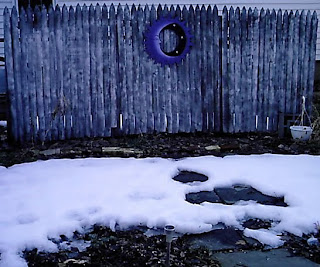 The snow is receding from my patio...

Listen
Nothing says spring louder
than the sound of ice melt,
unless it's the hopeful little two-note song
of the chickadee, that drops like liquid song
into the silence. 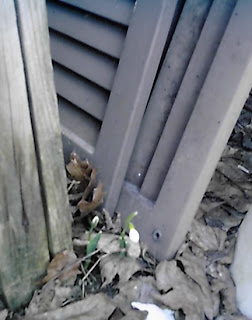 Snowdrops bloom in a sheltered spot.

I am responsible for helping a class of second graders understand two digit subtraction. When I was a child, the process of transferring an amount from the tens column to the ones column was called borrowing. Now it's called regrouping and the initial lesson for visual learners begins with a paper divided in half on which wooden pieces of various lengths are laid. One half of the paper is labeled TENS, the other half, ONES. A single rod marked into ten squares is a ten rod. Small single squares are ones cubes.

"Show me the number 23," I instruct a small girl with owlish glasses who, after three days of general class instruction, still does not understand the concept. She peers at me, then reaches for the rods and cubes and organizes two ten rods and three ones cubes. So far, so good.

She peers at me again and reaches for a ten rod. I nod. She lays the rod aside. "How much is that?" I ask.

"Ten," she murmurs and lets her hands hover over the ones cubes. I wait, she hovers. Finally she says, "I can't do that."

Teaching moment. "What about the ten rod you have left?" I ask. "Can you make that into ten ones and borrow them?" She looks at me. A long time. Finally she sighs and says, "No."

"Because," she says, obviously puzzled by my stupidity (I am the teacher, after all), "they're all glued together." She pauses. "And I can't put a whole stick on the side with cubes."

Ah, the literal mind. "How about if you trade the ten rod for ten cubes and put them on the ONES side?" I suggest.

She dutifully removes the remaining ten rod, picks up ten cubes, and deposits them on on the ONES side. She waits, staring alternately at them and at me. "Now, how many ones do you need to take away?" I ask her.

"I just put them on there," she says. I bite my tongue. I begin again.

"You started with 23. I wanted you to subtract 18. You took away one 10 rod and borrowed the other ten rod. Then you regrouped the ones. Now you need to take away how many ones?"

"Why just two?" I ask. I can hear the echo of her puzzlement in my own voice.

"Because," she tells me with teacherly patience, "I took away two rods." She holds up her two index fingers. "One and one are two, see?"


*************
I must confess, numbers baffle me, too. They’re mysterious. They multiply and divide with impunity, they add up to something else or take themselves away. When they are called statistics, they lie. When they are angled, they get obtuse. And when they are money, they disappear. Put them on a form with words in fine print and they scare me to death.

I also have trouble making numbers do as I ask. For instance, I can write the number 56 but when I am not looking, the five and the six sometimes change places. That happens a lot in my checkbook. I have difficulty with zeroes, too. I was told in first grade that a zero represented nothing. Then I was asked to subtract 9 from 10. You can see my dilemma.

As a child, I was an embarrassment to my mother who could add whole columns of figures in her head and do long division without crying. I was the last one in sixth grade to earn a gold seal for learning the multiplication tables and the only one to continue using my fingers (and toes) for adding and subtracting long after calculators were introduced to the modern world.

In high school I dreaded math class. I had enough trouble with numbers I could see. When they became letters such as X and Y, I was lost. And when they got all mixed up in word problems – well, I ask you, if a train traveling at X miles an hour passes Chicago at 2:00 p.m. and a car traveling Y miles an hour leaves Des Moines two hours later, who cares where the conductor and the driver of the car meet for lunch?

As for fractions, they make me fractious. They are conveniently marked on the sides of a measuring cup; if I have to do other than cook with fractions, I leave the problem alone. Fortunately, for people like me, the ruler was invented. I am perfectly capable of counting the little lines between the big ones and the only numbers I have to deal with are the ones I am most familiar with (1-12).

*********
I reach over and remove eight ones cubes from my student's paper. She watches me with indifference. "How much is left on your paper?" I ask her. She counts the remaining cubes.

"That's the number we started with," I gloat, trying to rouse some enthusiasm in the small, pained face before me. "Good job! Shall we try another problem?"

My pupil looks at me with a sigh of resignation. "I'd rather go to the nurse, please."
Posted by Pauline at 4:54 AM 8 comments: 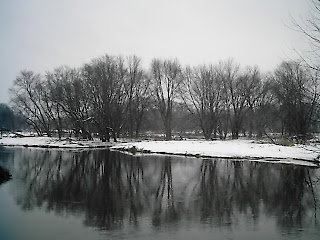 I walked down by the river 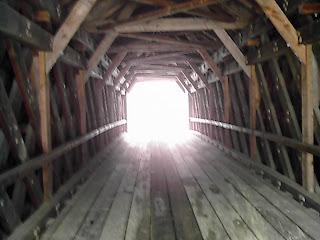 through the covered bridge 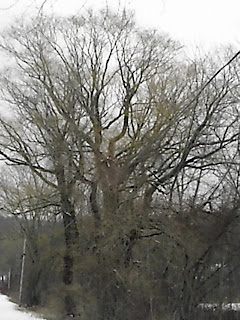 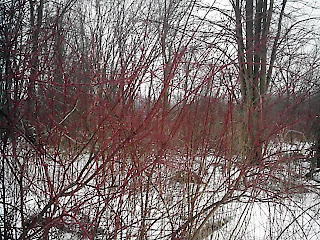 and the reddening osier withes.

The first of the returning red-winged blackbirds 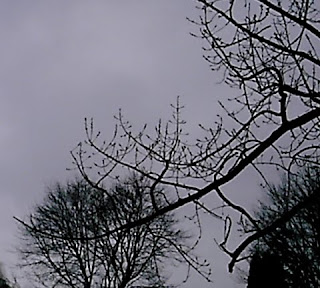 sang amongst the budding branches.
Is it spring, do you think?
Posted by Pauline at 1:41 PM 12 comments: