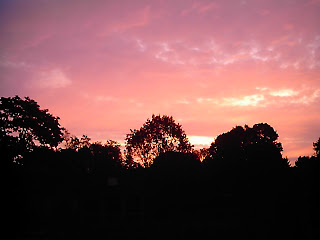 Dawn on Friday morning seen through rose colored clouds. Despite the red-sky-in-the-morning beginning, after work a friend and I drove 100 or so miles through the late afternoon sunlight to the Warren County Airport in Glens Falls, NY where the Adirondack Balloon Festival was in full swing. 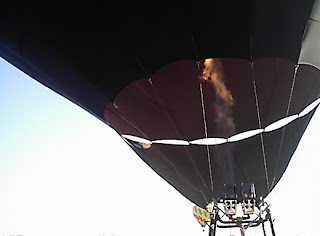 We inched our way along the airport access road, one of hundreds of cars streaming onto the airport grounds. The balloons were already inflating and drifting upwards in the late afternoon sky. Wandering the grounds among the colorful envelopes spread out on the grass, we were captivated by the whirring generators, the whoosh of air from the big fans, the blast of fire from the burners. One by one the baskets lifted up as people cheered and waved. 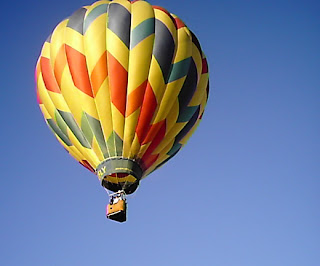 The winds bore the balloons aloft and away until they looked like ornaments hung in the clear blue. 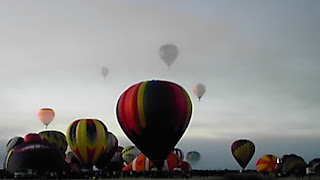 The next morning we rose at 5 a.m., hurried into our coats and hats and mittens and went out into the chilly dark. We should have risen at 4 a.m.! The line of traffic wending along the airport road was an immense snake of headlights stretching as far as we could see in either direction. Fortunately for us (but not for the balloonists), a dense fog settled into the valley, delaying the lift-off. Though we spent over an hour in the car, inching along just 3 miles in all that time, we were in time to see the majority of balloons inflate and rise through the sunlit mist. 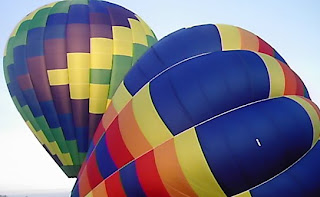 Though the airfield is vast, the balloonists often set up side by side. The result is "kissing balloons" as the inflating envelopes jostle one another.

I've never taken a flight in a hot air balloon though I've climbed into a tethered basket and felt the quick thrill one gets as it ascends as far as the ground ropes allow. There's always one balloonist that stays behind to offer a taste of what ballooning feels like. Someday, perhaps. Someday.
Posted by Pauline at 7:39 AM 13 comments:

I am four years old and skipping along Silver Street, holding my mother’s hand. We are going to see the train. My brother rides his tricycle along the side of the road and with her free hand my mother pushes the baby carriage in which my two sisters sit facing one another. The tracks cross our road down near the main road, not even a mile away from home, but when I turn around after we’ve passed the brook I cannot see our house at all so it seems a great distance. When we reach the tracks, we stand far enough away for safety but close enough for the engineer to see us and wave.

We can hear the train before we see it. There’s a crossing just a mile away in the center of town and another a few miles in the other direction in Connecticut. No matter which way the train is traveling, it must sound the crossing whistles – two long, one short, one long – to warn everyone of its coming. The deep rumble of the engine and freight cars follows quickly on the heels of the last whistle and I peer around my mother’s skirt to watch the engine chug its way toward us. It is very exciting.

The train pulls closer. Now I can hear the clanging of the couplings and the groans and creaks of the swaying cars. I can see the engineer high up in the engine, see him pull the rope for the crossing alarm and raise his arm to wave. The whole train is on us all of a sudden with a flash of metal wheels, the undersides of boxcars and tankers and open coal cars clicking past as we count them - one, two, three, four - all the way up to twenty on good days.

At night I lie awake and listen for the train to go by. In the dark, the whistle sounds lonesome and I think of the engineer high up in his seat, leaning out to wave at the stars and the moon.

By the time I am twelve, the parameters of my world have grown and I often go to watch the trains by myself. There is a factory building now on the far side of the tracks and sometimes a boxcar waits there for the train that comes up from Connecticut. When the door is open I can peer in. Usually the car is empty but one day a man is sitting in the car. He has a grizzled beard and his clothes are frayed and dirty. In front of him is a little Sterno stove and on that sits an opened can of beans. He looks at me and nods. I look around; no one is watching so I pull myself up into the car and sit down.

“Beans?” the man asks but I shake my head. His voice sounds rusty, as though he hasn’t used it in a while. I tell him my name and ask his.

“Beans,” he says, holding out a dirty spoon. I am afraid suddenly, though the man has not moved nor uttered more than those two words. Still, if my mother knew I was talking to a stranger… I hop up and go to the door, then turn back. “Bye,” I say. Beans just looks at me and nods.

As a teenager, the fastest way to walk into town is on the tracks. My friend Jeri-Lynn lives on Main Street but her house backs on the tracks so when I visit her, I go that way. I make a game of walking the rails, holding my arms out like a gymnast for balance. By the end of the summer I can walk all the way to her house without falling off once.

This morning the sun draws me out early. I breathe deeply in the sweet, chilly air when I hear a familiar whistle. I stand far enough from the tracks to be safe and close enough for the engineer to see me and wave. I count - one, two, three, four - all the way up to twenty. It is a good day.
Posted by Pauline at 6:02 AM 11 comments:

From the Velveteen Rabbit:
"Generally, by the time you are Real, most of your hair has been loved off, and your eyes drop out and you get loose in the joints and very shabby. But these things don't matter at all because when you are Real you can't be ugly, except to people who don't understand." 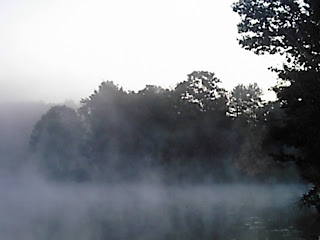 The mornings are cooler now and often shrouded in mist. The seasonal shift came riding in on an August storm that broke summer’s fierce and humid heat. The day after the wind and rain, the sky was a deeper, clearer blue, the evening air had a new chill to it, and the next morning the mists rolled in, heralding the end of summer despite the calendar.

It is the same every year and every year it surprises me. The signs of change are all around - leaves look like once bright curtains left too long in the sun. They droop, tired and faded and still in the windless afternoons. A few young maples and older, diseased trees flare bright red and orange amongst the green. My flower gardens, rife with bright blossoms just a few weeks ago, now sport more empty stems than blossoms. The pink lilies, the papery hollyhocks, the bee balm’s riotous red flowers are all gone. A few brave fairy roses hold small pink and red faces up to be admired but for the most part the flowers’ season has passed. Next month I will plant a few iris corms, bank the beds with grass clippings from the last lawn mowing and hedge them with raked leaves. All that beauty and brightness will sleep through the cold, waking when the world turns warm again. 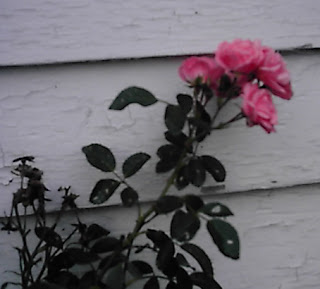 When I was a child, I resisted the change of seasons, never wanting the earth to turn as quickly as it did. Not yet, not yet, I’d think, wanting my wishing to have some effect. I still feel the same. Looking into the morning mist I plead with the rising sun, stay high, stay strong, just for a while longer. It doesn’t heed me – it never has. 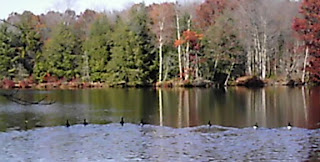 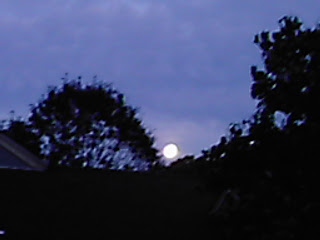 In the face of dire reports (and predictions) in the papers and on the news, I've been thinking about fear and how it drives us. There are things outside myself about which I’m apprehensive such as drunk drivers on the same stretch of road, manic people with guns and knives and a grudge, global weather changes. There are internal things – killer viruses, toothaches, the occasional return of the sciatica that once paralyzed me for months, a second kidney stone, the creeping physical threats of old age. There are personal, emotional hurts such as the loss of a partner and the inevitable deaths of people I love, or being old and alone and ill. But these seem to me normal fears, worries that all humans cart around in daylight hours or take to bed with them as food for nightmares.

When I was small, I feared the monsters that lurked at the back of my closet and under my bed. As a teen I worried about forgetting my locker number, getting a bad grade, or never being noticed by the hunky hall monitor who stood in front of my math class. As a young mother I was afraid for my children; what if they got sick, lost, stolen? What if their arms got broken or their hearts? As a single mother I was afraid I wouldn’t be able to support us all. As a single member of the baby boomer generation, I wonder if I’ll be able to support myself on my SS check.

Many of the things I’ve feared have come to pass and I am still alive and whole and willing to get up in the morning. Digging around in my psyche, I realize that it’s not the things that come at me that frighten me, it’s more the anxious concern about how I will handle things that gives me pause. Will I be generous enough, kind enough, tolerant enough? Will I ever stop worrying that there isn’t enough of everything long enough to see that there’s an abundance of everything I need? Will I ever learn to trust again, or to hold my judgments in check?

I‘m not afraid of the dark anymore, and as a friend laughingly put it, I’m not afraid to die; I’m more afraid I’ll have to come back and do it all again. FDR was right – the only thing we have to fear is fear itself. Angst can be our undoing.