I don't consider myself an old person. Old to me is bent over, doddery, white-hair on a wobbly head, shuffling feet, the inability to tend to one's self. I'm thinking 100+ is old. I'm a long way from that, being just a couple of years shy of 70. That being said, there are parts of me that feel older than others and nothing brings that home more clearly than a day of gardening.

Spring gardening is a test of strength. Beds that I prepared in the fall need raking and tilling. New beds mean hauling wood and soil and manure from the farm next door. None of that sounds particularly strenuous because hauling, raking, tilling are just words. They tell nothing about trying to pick up a 6'x4' post with arthritic hands, dropping it, trying again, trying to find purchase without thumbs. They don't let you see how hard it is to drag an iron rake through soil that's been compacted by winter snow and ice. They don't come near to explaining the yank on the shoulders, the blisters on the palms, the strain in arm muscles as you pull a cart full of manure-rich soil across a long stretch of bumpy terrain. Everything is easy when you just talk about it.


I managed to shovel two loads of soil for a new raised bed into my little Garden Way cart (a salvaged gem from the Transfer Station) this morning, haul it from the farm next door to my little hillside garden patch and rake it smooth. Yesterday I'd tilled the pea patch and untangled the wire-draped posts that held last year's vines. I abandoned shovel and rake for a hammer and holding one post at a time, pounded the sharpened ends into the ground. See how easy that sounds? It leaves out the slipped hammer, the bruised thumb, the twist of the waiting post that grabbed the back of my sweatshirt with a jutting piece of wire, the hole in the sweatshirt and the choice words I had for the joys of gardening.

I took a lunch break and sat on my outdoor swing, contemplating the pea bed. The posts were standing straight but the line created by the unyielding chicken wire was a tad crooked. Surely pea seeds don't care if they grow in a slight curve. They'll reach up their cute little tendrils and grab on just as avidly to a crooked wire as a straight one. So sayeth this experienced pea planter. I know because they did so last year and the year before that and the peas were plump and sweet in spite of their serpentine rows.

To my dismay there was only one package of pea seeds in my garden bucket. The rest will have to be planted next weekend. Then the potatoes will go in the ground. The lull between them and the rest of the vegetables that wait till the end of May for the soil to be warm enough will give my blisters just enough time to heal.


Incongruously, a stark black crow flaps across my line of vision to the drone of a jet hidden above a vast vast army of storm clouds that's muscling its way across the sky. Torpedo shaped, some of them, they swallow the blue in great gulps and devour the whiter, puffier clouds at the horizon. I do not want the rain, not today when the air is at last mild, temperate and balmy and springlike after so many weeks of cold. The lilac bush wants the rain, and the soft green shoots of daffodil and tulip, and the newly upturned garden beds, but not me. I want to be out of doors in the sunshine that smiled down from yesterday's cloudless sky, held in that delicious warmth like water in a simmering kettle, like the roots of a sapling wrapped tightly in burlap to keep them from freezing, like a baby bird nestled in a handful of fluff and feathers and woven grasses.

The rain is not to be a drenching, more a sprinkling, a quick succession of light showers that will water all the green growing things, a sweep of the sky hose, just enough. The sun will reappear, the last of the ice beneath the pile of wood chips wanting spreading will melt, the earth will smell rich and brown when I turn it over with my pitchfork. I will haul load after load of chicken manure-rich dirt to fill the boxes and I will stop often to sip sweet tea and gaze over my small domain, noting with pure pleasure the symmetry and rightness of all I survey.

My dad would have been 103 years old today, his birth-day. I still miss him! I know I've posted this before but it seems a good tribute to a man I dearly loved. 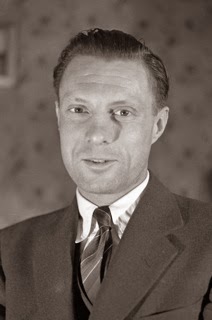 My first memory of my father is a visual one. I am a toddler and I am sitting on the floor behind the brown chair in the living room. Before me are two polished black shoes and two very long legs clad in khaki. Those long legs would often make a bridge between Dad’s favorite green chair and its matching hassock and we children would try to crawl under him without being caught. It was a favorite after-dinner game.

Dad raised chickens for a living. In the army he’d been responsible for training the carrier pigeons that flew messages from platoon to platoon. His peacetime job involved several hundred chickens, a brooder house, a long hen run, and a slaughter shed where he killed and dressed the birds for market. The farm was lost first to a flood that left hundreds of carcasses across the yard and garden. Dad restocked, only to learn the chickens were diseased and this second setback cost him the farm.

The years that followed were difficult. There were four children to feed and a mountain of debt. For a while, Dad worked the night shift at a lime kiln. By day, we children had to be very quiet so as not to waken him while he slept away the sunny morning hours. We spent a lot of time in the abandoned chicken houses, running races down the long hen run or roller-skating on the cement floor of the brooder house. On weekends and sometimes after school, Dad took my brother and me hunting. We ate whatever was in season—rabbit, duck, partridge, grouse, venison. He loved to fish as well as hunt and fishing season often found us knee deep in some cold stream, angling for a few trout for dinner. We never went hungry.

In the 1950s, Dad went to work for the Post Office as a rural route carrier. Before the law was passed that would not allow a mailman to carry passengers in his car, we sometimes rode with him, helping to deliver phone books or shovel snow from mailboxes. Dad was good at his job. He liked people and never passed up a chance to be helpful, often delivering messages and meals to shut-ins. The people on his route paid him in kind. Every Christmas, he would come home with dozens of gifts from grateful patrons.

Dad wasn’t much of a gardener, preferring ball games and evenings with his friends to digging in the dirt. Still, every spring he worked with my mother to plant tomatoes and peas, squash and cucumbers, and long rows of string beans. Sometimes he and I would take the big dishpan, fill it with bright green pea pods, then sit together under the maple tree to shell them for dinner. We would hunt for morels in May, gathering hands full to sauté in garlic and butter. He knew where every stalk of wild asparagus grew.

We owned an old push mower and summer evenings would find him cutting the lawns. I loved to follow along behind him, watching the grass fly from the whirring, clattering blades. When the chores were done, he and my mother would play baseball with us on the front lawn. Using trees and doorsteps for bases, we hit and ran, yelling and laughing until it was too dark to see the ball.

Years after marrying and moving away, and years after my father died, I moved back to the old family homestead. I worked in the garden, remembering those long ago days when Dad and I planted vegetables together. I followed in his footsteps as I mowed the lawn or searched for wild asparagus along the roadsides. Often just at dusk, when the fireflies began to twinkle and the last of the light was fading, I thought I could hear him calling me to come in. His presence was just a memory but it is a memory that pervades the very fiber of my being.
Posted by Pauline at 6:41 AM 4 comments:


There's no need for me to wait until I die to be in heaven - I have it all here right in my own backyard. Not that I really believe in heaven (or hell) as actual places, but I do think that we make our own little bit of the idea of heaven with our beliefs about life. I read that somewhere, and it made sense to me, the notion that we create our future heaven by living in a way that makes us most happy right now. When I asked an old friend what he thought happened to us when we died he answered, "I think we stay right here," and that thought made me feel good, too. Heaven to me would be living right here and just as I am.

Today the sun shone down from a bright, cloudless sky that was skim milk blue along the horizon and crayon blue up above. The wind was mild, the air warm. I sat on my outdoor swing with a book (unread) and a mug of tea (unsipped) and watched a bevy of robins mine the just-greening lawn for worms. Overhead a skein of geese unravelled as it neared the pond, bird after bird setting down in a flurry of feathers and a good deal of splashing.

In the garden boxes last year's herbs - oregano, garlic and chives - have poked through the soil and rhubarb shoots are reaching for the light. All along the cottage foundation the daffodils, iris and hyacinth are holding their leaves tall and straight. Snowdrops bloom in profusion and here and there a crocus has opened to show off its Easter colors. The air smells of damp, sweet earth.

From the farm next door the rooster and several hens wander into my yard, stirring the earth in the empty garden boxes and scratching under leaf mold for bugs. Two guinea hens follow them making a racket, stretching their necks as they run back and forth from one side of the lawn to the other. The laundry flaps in the wind, the sheets snapping smartly.

I just sit and watch and listen and sniff, letting thoughts run through my head without snagging any of them for analysis. It's enough to let the world wash over me. Right here, right now, is close enough to heaven for me.
Posted by Pauline at 5:56 PM 8 comments: