My left leg has been on fire for three days running, a result of a pinched sciatic nerve, making the slightest movement painful and walking nearly impossible. I move -slowly- from one point to another hunched like an old woman, dragging that leg along like a sack of coals. There is something about intense and constant pain that alters the personal landscape. Inconsequential moments loom large: how many steps from the bed to the bath, how many minutes to prepare a meal, how far from sofa to sink and back while trying to carry a plate. The things I do without thought, with no more than passing attention suddenly have all my attention.

I sit on the sofa and survey my domain in a new light. I watch the morning sun shimmer through hanging window decorations. Two red glass birds and a prism of dried flowers cast the sun across the floor in a rainbow of colors. Dust motes dance in the beams and settle on the furniture. Dusting, however, will have to wait, as will washing up and vacuuming and polishing. For a rather active woman, this forced halt of things needing doing is both a curse and a blessing. It's hard to let work wait and freeing to sit idle, dreaming in the sunshine. The afternoon sun pours through the west window and lays itself across the end of my bed. I lie myself down in its warmth and try not to think about how hard it will to get up again.

There are other things I am reluctant to put off but must. There will be no babysitting for a few days, no playing on the floor with the Bean, no carrying her upstairs to bed, or outside to play in the snow. There will be no snuggling Baby Lily as she drinks her milk or tries out her voice at every point of eye contact. There will be no scurrying about trying to tidy the house or make dinner before my work-weary daughter and son-in-law get home at night.

I've had acupuncture and physical therapy, TENS treatments and massage. I've used ice and heat and Arnica gel. I've tried gentle Yoga stretches and bed rest. Finally I've resorted to some heavy medication to give me surcease. In a few days I hope to come back with far less time on my hands to write a poor-me post!

Inside the Mind Is An Interesting Place

My Sunday writing friend found a wonderfully written story about a child who tasted a bug and we used that as our prompt. Here's what resulted:

Often, while minding our own business
we are swallowed by a child
curious about how the world tastes
on a neophyte tongue,

only to be spit out when we wiggle,
impatient to be about adulthood,
too abrupt with our answers
to be taste-tested.

we are spit out into a new world,
lucky to be wakened
from our self-important dreams.

A Different Point of View 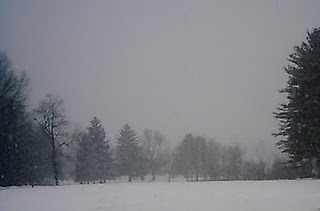 You’d think, looking out across the vast expanse of snowy meadow that snow would be the great concealer, covering every sin of autumn. You would be wrong. Snow is, instead the great revealer, carrying on its surface the calligraphy of bird feet, the black dot trail of infinitesimal seed dispersal, the tracks of leaf travel refrozen in small puddles of melt. On its surface are scrawled the death stories of bloom and blossom, the life stories of mole and mouse, the travel journals of fox and coyote. 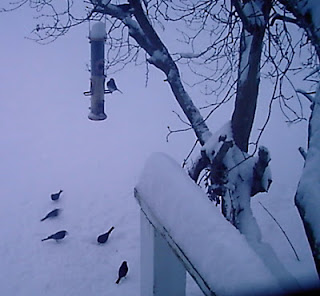 Snow reveals man’s impatience with weather where it is heaped, gravel-stained, along the roadsides and pushed impatiently back against the banks of pond ice. It recounts, in rounded belly and stony eyes, the story of a child at play and bears traces of snowshoe and ski with grace. 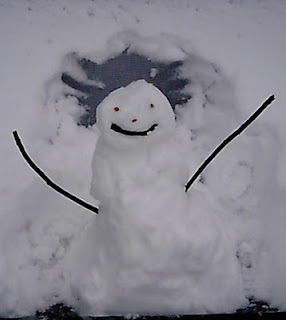 Nothing under the snow is unknown, only seen in another form. Boulders sleep under blankets, bushes huddle in imitation of sheet-draped parlor furniture, fence posts and tree branches become confections, frosted and glittering. You could speak of snow as the great concealer but you would be wrong. It merely puts the familiar in an unfamiliar light and reveals the minutiae of the normally unobserved. 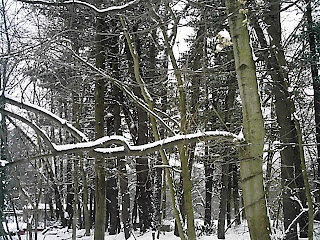 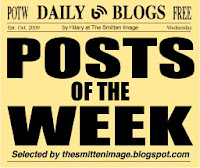 Let Me Count the Ways

Love is like wind - you don't see it but you see its effects. I am reading to the Bean at nap time when she suddenly leans over the railing of her bed and hugs my head. I look up at her from my seat on the floor and her eyes are warm and sparkling and so moved by the winds of love that I nearly weep.

Tiny baby Lili stares at me as she drinks from her bottle and when I smile at her, she smiles back, her eyes lighting up as though someone has flipped a switch. Milk dribbles down both sides of her mouth but she doesn't care. We're in love with each other and that's better than milk.

I pull into their drive each week for my stint as Nini-in-charge and my son-in-law drops what he's doing to hurry out and help lug in my bags and boxes. My daughter waits at the door for a hug and a kiss. They make breakfast for me, fetch my special tea mug, make me feel as though I am the most special guest they've ever entertained.

The phone rings and it's my grandson wanting to Skype or my granddaughter wanting to tell me about her swim team or my son wanting to say he loves me or my daughter-in-law catching me up on family news. When I'm at their house I'm the center of attention. It's like being Queen For a Week and love sweeps through the rooms like a zephyr.

Every week there's the phone call from my distant daughter. Her laughter and mine get tangled in the phone lines until I'm sure everyone talking at the same time we are can hear it. She and her husband are professionals at picking out just the right cards for any occasion - I've saved them and whenever I feel blue I haul the box out and read through them. It's like opening a window so that love can blow through.

My oldest son in Oregon leaves "love you, Mom" messages in my email, on FaceBook, on the answering machine. He often tells me how he sends messages to me on the wind, knowing the jet stream will carry them eastward. When I feel a breeze on my cheek, I know it's him, thinking of me.

The mail arrives and there's a card or a letter with a "little something" tucked inside. My sisters never fail to anticipate my running short at the end of each month. I never do, of course, because of their thoughtfulness.

The winds of love are mighty, and they are always blowing.

Out with the old, in with the new! It’s the January cry of merchants everywhere. Year-end clearance extravaganzas are being announced with manufactured jollity in newspapers, on television commercials, on the radio. So why not apply the same philosophy to people? Clear out a few old habits and issue in some new ones.

With resolve in hand I take a look around, deciding to start with my refrigerator where a couple of bad habits—ice cream and bacon—lay waiting for me to indulge (though not simultaneously). I take the ice cream out of the freezer. It’s coffee flavored, rich and creamy and slightly softened around the edges, just the way I like it. I carry the carton to the sink and lift the lid. I figure I’ll take one last taste, just one, before I throw the rest out. Waste, after all, is sin and sinning is a poor way to start out a new year. I grab the first spoon at hand (a serving spoon, as it turns out) and scoop some of the luscious stuff to my mouth. How can something so bad for you taste so good? One spoonful leads to another, of course, and in the end I don’t have to throw out any of the ice cream.

I go back to the fridge for the bacon. There are only a few strips left and I am gazing at them longingly when I spy the last two slices of bread sitting forlornly in their bag. Looking away quickly, my eye lands on a half-cut tomato and a leaf of lettuce poking invitingly out of the crisper. Waste not, want not, I chant, and moments later wash the ice cream down with a BLT.

Because this is the way I often cleaned out the refrigerator in my regretful past, I turn next to the closet where several garments that no longer fit hang in reproachful silence. One by one I take them off their hangers and stuff them into a bag destined for the Good Will bin. Halfway to the door, I have second thoughts. Now that I’ve given up fattening foods, these clothes just might fit again some day. I stash the bag in the back of the closet.

With that “Wow! What a good day!” feeling, I drag on my boots, pull on my mittens and set out for a brisk walk. From now on, I resolve, I will walk two miles every single day. I get as far as the driveway when the first sprinkle falls. Our predicted snow is obviously going to begin with rain. By the time I make it back to the house and pour myself a cup of hot chocolate decorated with a mound of freshly whipped cream, a mixture of sleet and snow is coming down in wind-driven gusts.

Isn’t that always the way? You make a few good resolutions and the weather or your conscience or some other thing you think you have control over leads you down the road of best intentions. It’s a good thing we’re given a whole year to practice our well-founded resolve.

A little gift to you all: For a splendid post on resolute wishes, see Friko's writing on the subject.