The small birds in my yard
singing
are not aware of world events
unless on some subliminal level
I cannot perceive.
They sing regardless,
not immune to the frozen sleet
that blankets the grass,
not indifferent to the murky clouds
hanging on the horizon,
not unaware of the taciturn cold,
and not in spite or because of—
they sing because it’s what they do;
the chickadee in flit mode
among the lilac branches,
the blue jay screeching from a treetop,
the nuthatch marching headfirst
down a crenulated trunk,
the cardinal dropping liquid notes
into the air.

The pulse of life that throbs in them
throbs in me,
the songs they toss into the daylight
reverberate in me,
the joy of sunlight, of blue sky, of scattered seed
are mine, too,
a reminder that life in the midst of life
is mine for the noticing
a feast, a concert,
a hand held out to me by the world.
Posted by Pauline at 8:30 AM 8 comments:

Labels: birds and what they do, hope, world affairs vs home 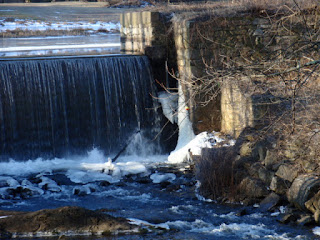 My morning walk took me to the Mill Pond dam, where water from the pond poured in torrents over the stone edge, crashing onto the rocks below - a death drop for anything other than water and slippery fish. As I stood and watched, the water leapt up and hurried downstream. Always the same rocks, never the same water, I thought, watching as the current hustled masses of bubbles past the banks.

There was one spot where the current split, where some water turned right while the rest maneuvered to the left and back into the main stream. The water that took a right turn spread slowly into a side pool where it fanned out to the very edges of the bowl and stilled almost to a full stop, waiting to add itself to the ice that formed in the cold. My thoughts, which had tangled themselves into ugly knots overnight smoothed out and I began to see what the brook could teach me.

What seems like a precipice is also a jumping off point. What seems like certain death is merely a transformation. Water doesn't die when it hits the rocks, but it does change form momentarily, becoming great masses of bubbly foam. It might seem dangerous to be in the strong central current but that's where the movement and the action are, right in the thick of things. Where the water slows and stills, ice forms, trapping movement.

Some of the water, I  noticed, did not succumb to the pull of the edge but re-entered the current. Bubble after bubble refused to cease moving and returned to the fray, jostling for a new position in the rushing stream. Anthropomorphized, those bubbles gave me insight into my own possible paths - be part of the turbulent current, slow down and seek an alternate route, ignore the pull and find a place to freeze.

The laws of nature and nature's god always make me feel better. 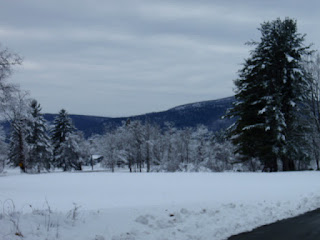 Me and my camera
the giant blue sky
the endless circle of horizon
the great mound of the mountain
stolid behind tapering trees
the far shore of the pond
the water, ice crusted and still,
the jumble of roadside brush
full of chittering finches
the one oak leaf that would not let go
the soft cap of snow in an abandoned nest
the fragile ice on Queen Anne’s lace
the drop of frozen water at the tip of a branch
the shadow of a single vine on a fence board 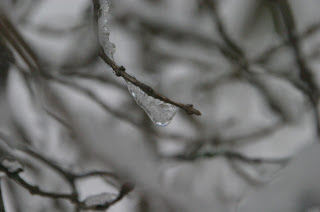 our eyes, one alive, one mechanical
recorded it all

that despite being captured
spill into the day, singing,
as though me and my camera
did not exist


except as still shots 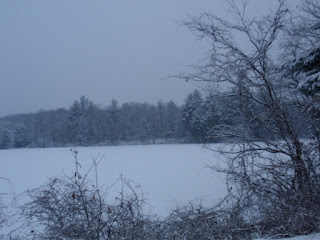