I remember a time when my mother, then in her sixties, made a cake and it flopped. "I just can't seem to cook anymore," she sighed and I thought to myself, "Sure you can. Just get a mix and bake that." Mama would have thought it poor advice. She'd never used a mix for anything. She'd been brought up making everything from scratch. Well, it's my turn now and I can belatedly relate to how she felt.

First it was the brownies. And they were made from a mix. I followed the directions on the back of the box, baked them for the requisite amount of time, and still they had to be eaten with a spoon. My neighbor, J, with whom I shared both story and a spoon, commiserated with a story of her own. She'd whipped up a batch of waffles, heated the waffle iron, opened the lid, spooned in the batter, closed the lid, and when the steaming stopped, opened the waffle maker to discover it was the sandwich maker instead. "We called them wafliches and ate them anyway," she said.

Though we laugh at each other, there runs an undercurrent of sober worry beneath our hilarity. Is this the beginning, we wonder? It isn't just cooking failures. We mis-button our clothes, find ourselves mid-trip wondering just where our cars are taking us, waken everyone in the household at night with the crash occasioned by catching our pj bottoms on the toilet seat, and lock our keys in the car, sometimes with the car still running. (See Laughing on the Way Out, my other blog, for details.)

"Who's going to take care of us?" we often ask each other.

The latest fiasco occurred this afternoon. I'd been shopping and angel food cake mixes had been on sale. I love angel food cake, especially with fresh berries and whipped cream. I picked up some of those, too. While the cake was baking, I called J and said, "Come over in about an hour and have dessert and tea with me." She never says no.

I whistled while I whipped the cream and hulled the strawberries. The oven timer chimed. I grabbed two potholders and whisked the cake out of the oven. It hadn't risen as much as angel cakes usually do but I attributed that to the weather - it was rainy and damp. I tipped the pan to rest upside down, the way you do with angel food cake pans, when to my surprise the cake began dropping onto the counter in great chunks. I grabbed a plate to catch the rest. Meanwhile the crust of the cake hung like an empty skin from the bottom of the pan insert. I peeled it off and draped it over the chunks. By this time I was gasping for breath. All alone in my little kitchen I hooted and howled, hoping I'd have control of myself before J got there.

When she opened the door, she paused. On her face was a mixture of surprise, dismay, amusement and... recognition. Then, "OMG! Who's going to take care of us?"

We fell about laughing. And of course, we had to try the cake. After all, there were berries and whipped cream. They'd help disguise what looked and felt like a pile of blanched silly putty. While we ate, we traded stories of food failures when we were young wives - the well-pricked but unbaked pie crust that let all the custard seep to the bottom of the pan while the crust rose sluggishly to the top, the tuna noodle casserole without the tuna, the minute steaks cooked for the same length of time as the boiled potatoes. J looked at me. "Do you suppose," she asked, "that we've been failures all along and we're only now realizing it?"

I sure hope so! 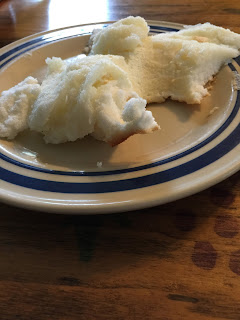 Posted by Pauline at 2:48 PM 9 comments: Links to this post