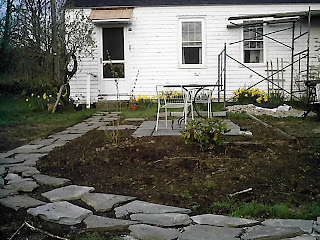 The weather has been stunning. Between rests I sorted slates and leveled the ground for replacing the path, whose larger stones I took for the patio. 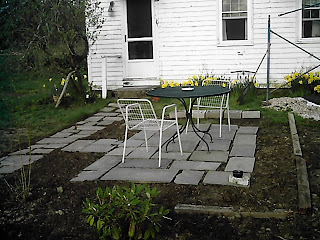 When you walk around the corner of the garage, here is what you see. By mid-summer, the scaffolding should be gone, the fence should be up, and the flowers should be blooming. I'm planting hollyhocks and lupine, daisies and blanket flowers. A trellis will support morning glories. Violets and lily of the valley will fill in the blank spots along with whatever else strikes my fancy. Already my landlord has planted a small forsythia bush at one corner and a little rhododendren nearby. 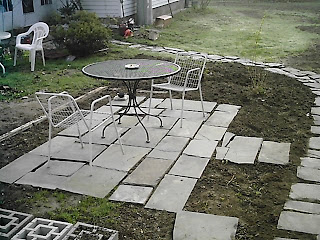 When you come for tea and sit in one of the soon-to-be-painted chairs, this will be your view. By then the lawn should be grassy again and there will be fresh mint leaves behind your chair!
Posted by Pauline at 3:53 AM 9 comments: 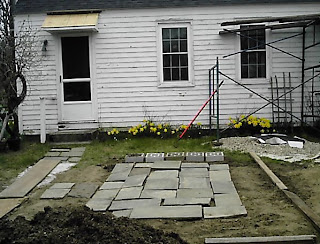 A bout of bronchitis and a sinus infection coupled with a pinched nerve in my upper back have conspired to keep me indoors. Outside the grass has turned emerald under the falling rain and the daffodils have bowed their heads to the stiff wind. I catch the scent of wet earth and hear the birds chirping each time I open the door to let the cat in or out. Sometimes he curls up for a nap with me; other times he is as restless as I feel being cooped up.

Before I succumbed, I spent a morning laying out my new patio slates. Slowly the yard is being landscaped. When all is said and done, I will have a small, partially enclosed patio complete with flagstone terrace, several sections of weathered privacy fence and oodles of flowers surrounding an outdoor table and chairs. Above and below are photographs of the tentative flagstone placement. The smaller openwork cement squares will hold herbs. When it is completed, you're all invited to my new patio for a glass of iced tea. 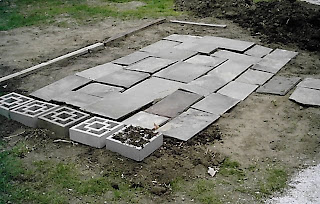 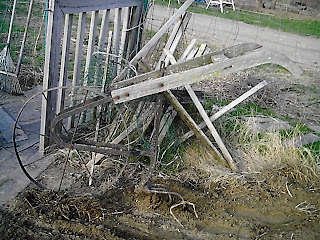 It's spring! I'm headed out to the garden to plant spinach and early potatoes, chard and peas. The seeds I saved from last year's heirloom tomatoes have sprouted and yearn at the window in the sunshine. When the first seeds have been planted and covered with soft earth, I will head to northern Vermont and a few days of vacation with my 101 year old friend Lora. No doubt we will spend some of our time planting her own early vegetables. Posts here may be scarce as the light lengthens and the days grow warmer but I'll check in on rainy days and late summer evenings. I'm off to play in the great outdoors. 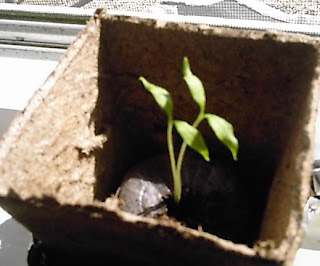 Packed away in a box marked “Easter,” are four baskets made of woven wooden slats. When they were new their colors sang together in bright spring hues of purple and yellow and pink. Now the colors are faded to soft memories and one basket is missing its handle. Each one still holds its nest of green, shredded paper “grass,” matted now and permanently indented with egg-shaped hollows where, years ago, heavy, handmade chocolate eggs decorated with swirls of pastel flowers lay in wait for Easter morning. There is a small crocheted chick in each basket. They used to snuggle over hardboiled eggs that had been dipped in colored water until the shells turned pink or green or heavenly blue

On Easter morning there were decorated, hand-blown eggs, the fragile shells painted with tiny skipping bunnies or miniature bouquets of flowers. There were also small, foil wrapped chocolate eggs, soft, sugary marshmallow Peeps, a handful of jellybeans scattered like fragments of a rainbow, and always a small toy—a plastic yellow chick that, when pressed down, laid a tiny white egg, a wind-up bird that hopped frantically about on stiff little legs, a gracefully sculptured rabbit painted robin’s egg blue with the faintest bit of pink blushing its long, delicate ears.

When I was a child, there was an exciting newness to Easter morning. New clothes were bought especially for Easter Sunday church services and the soles of new shoes had to be scuffed. Finding the carefully hidden Easter baskets was part of the excitement. It was the only morning I was allowed to have candy for breakfast. Dinner was traditional, too. Glazed ham alternated each year with roast lamb and there was fresh asparagus and a coconut covered cake baked in Memere’s cast iron lamb mold.

Even after they all went off to college, my kids would still come home for Easter dinner, and though the holiday had long since ceased to hold any religious significance for me, I clung to certain rituals. Early on Sunday morning the kids would drift sleepily into the kitchen, fetch cups of coffee and ask, just as they had when they were small, “Did the Easter Bunny come?” Then they would set off in search of their baskets, the same ones they remembered from early childhood. The Bunny never disappointed them. This year, however, with all my children far away and the grandchildren with plans of their own, the baskets will stay packed away in the box marked “Easter.” It is a landmark of sorts, the same way Christmases and birthdays away from home become milestones in the process of growing up. But, the baskets will keep, just as the memories have.


photo credit: www.bunnyrabbit.com
Posted by Pauline at 3:08 AM 6 comments: