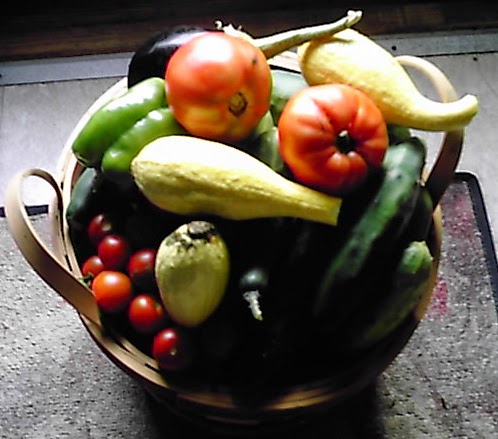 The hummingbirds are still coming to the feeder but my mornings no longer begin with bird song. The early hours now belong to the raucous crow and the belligerent jay. And the rooster, of course.

The butternut squash plants have taken over the garden. I counted 11 squash nestled among the wandering leaves. The two potato plants I dug up yielded over 25 good-sized potatoes. There are at least 30 plants in the potato bed. I've frozen half a dozen quarts of green beans and eaten almost as many. The spinach did not thrive, nor the beets, but the swiss chard has been delicious. Two of my tomatoes grew to the size of a soup bowl!

Afternoons are bathed in shimmering golden light. Leaves and grass are still green but their vibrancy is dimming; pastel flower blossoms have given way to vivid yellows and purples. Farmer's market counters overflow with corn, with carrots, and baskets of beets and beans. Soon there will be pumpkins for sale and pots of mums. 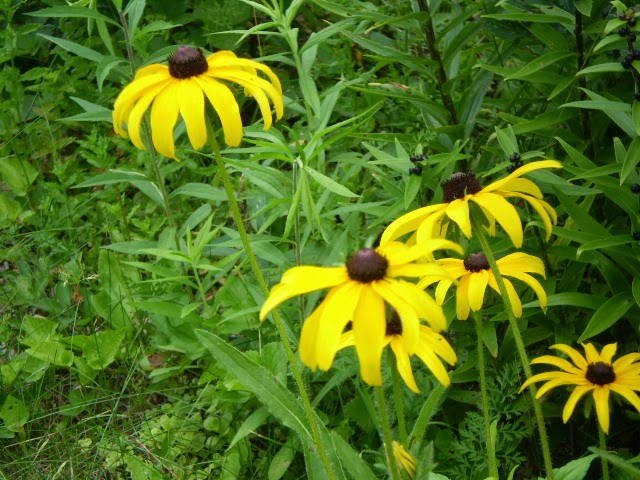 The sun rises almost half an hour later and sets half an hour earlier than it did a month ago. Crickets chirp late into the evening and summer bugs buzz in the dark. Songbirds are beginning to bunch; noisy flocks of starlings swirl and settle in the treetops, little yellow finches flutter haphazardly from thistle to thistle, swallows swoop and dive in groups over the pond. In a couple of months the geese will again gather on the water, talking amongst themselves of the coming winter and the impending trip to their southern homes.

A number of classmates from my high school graduating class will gather in early September for a reunion picnic. I haven't seen some of them in 50 years. Out of a class of 68, 11 have passed away. Only about half of those remaining will attend. We're scattered across the US, travel and lodging are expensive, some are suffering ill health. I can clearly remember standing outside the school on graduation night, hugging these friends and vowing to keep in touch. So much has changed in 50 years. We've changed, too. I wonder if any of them will seem like strangers or will time melt and warp, allowing us to see each other as we were, to recognize the 18 year old hiding in a 68 year old body?

I have projects unfinished, books unread, plans unfulfilled but life is good, nonetheless. Summer, with its heat and storms, its ups and downs, will segue into autumn as it always does. I think of the saying, "Don't mourn what is not, be grateful for what is," and I am content. 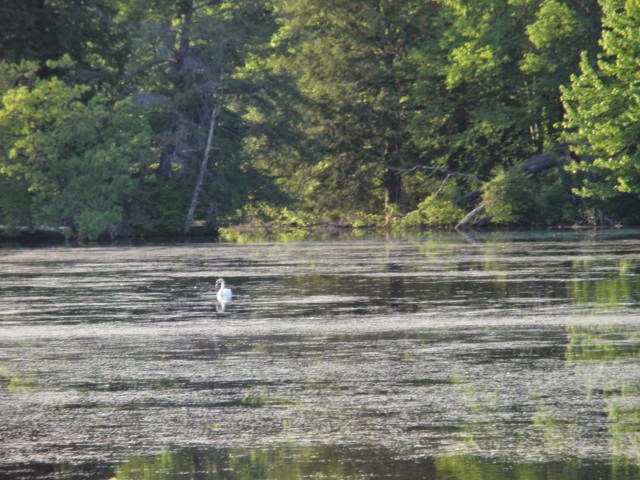 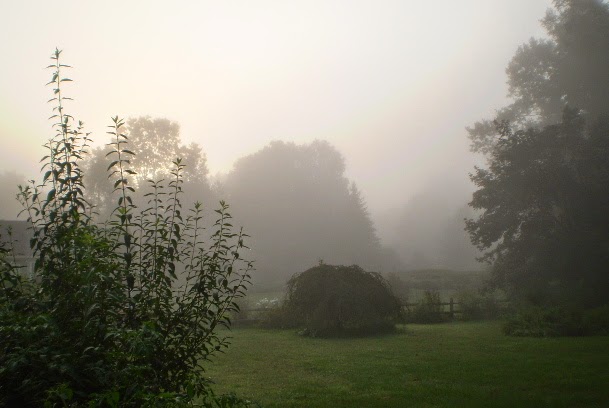 Raindrops string themselves along the garden fence and drip from the leaves of the coneflowers. A thin mist hovers over the tops of the evergreens and tangles itself in the maple leaves. The sky is pale gray and smooth as the inside of a seashell. A slow, quiet rainy day seems to contain less energy than one bright with sunshine. I'm tempted to curl up on the daybed with a book, the comforter over my bare feet and a cup of hot tea at my elbow.

Yesterday I poked among the squash leaves, big as elephant ears, looking for zucchini. What I found instead were winter squash, young and pale but growing into the familiar flared shape of a butternut. I don't remember planting them. My cucumbers have dozens of yellow flowers, the bean plants are strung with miniature beans, and the chard stalks gleamed red in the sun. I picked the few beets that had matured, and a handful of late peas. The pea vines are mostly dried out and hang dejectedly on their fence. Next month I will dig the potatoes and make a feast of them.

July slipped into August without my noticing until I went to write a check and had to look up the date. The summer has been a blur of travel and grandchildren and long, languid weekends spent bicycling or lazing about in my screened tent. There were weeks that blended into one another in a haze of heat and lightning storms. Family obligations kept me away from home for days at a time so that when I did return to the cottage it was like stumbling on an oasis.

The sky is beginning to brighten. Perhaps the sun will make an appearance after all and the energy of the day will change from indolent to industrious. Perhaps I shall surrender to it; perhaps I will reject industry in favor of a nap in a puddle of sunshine.
Posted by Pauline at 6:01 AM 7 comments: