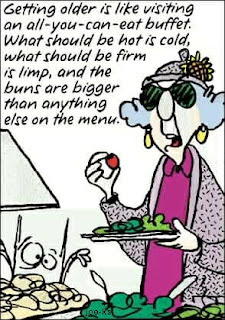 In a comment to a piece I'd posted, I was asked if I had another blog and upon reading that, I thought, "Bite your tongue! I have enough trouble posting to one."

And that's still true but now I DO have another blog, one written in collaboration with my neighbor and good friend J who is, bless her heart, aging at the same rate I am. We have exclaimed and then laughed over what's happening to us so often she said, "You ought to write a book!"

It's much easier to write a blog. So, for those of you who are interested, you can read of our head-shaking, mostly irreverent thoughts on the changes we're facing here.
Posted by Pauline at 2:13 PM 5 comments: Links to this post

A word cloud? How cool is this!

You're looking at a wordle, a "cloud" of words from a piece I wrote about seeing and believing... one must obviously look in the "clouds"
Posted by Pauline at 3:55 PM 4 comments: Links to this post 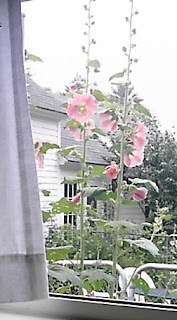 Summer brings warm nights and even warmer days, azure skies with cotton ball clouds, green growing things crowding the earth with flowers and fruit. And bugs. They are everywhere. Swarms of tiny, white-winged gnatty things besiege me the minute I step outside. They dance at head height and make a beeline for my eyes and mouth. I bat my way through them only to find a swarm of their black cousins around the corner. 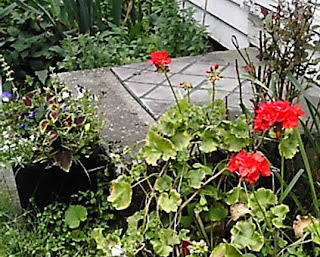 Bees are out and about, buzzing emphatically. Yesterday one hovered just above my doorstep. My arms were full of groceries so I used a sneakered foot to wave it away but it rose only a half an inch, wings flapping furiously. I nudged it again but it refused to move. I set the bags down on the step beside it, opened the door and the bee swept in ahead of me, made a quick circuit of the kitchen and flew back out only to take up guard again in front of the door. It hummed angrily as I scooped up my groceries and hurried inside. It was still there an hour later when I went back out.

Spiders, which definitely belong somewhere else, have taken up residence in my little cottage. They are everywhere—in the kitchen among the canned goods, in the bathroom behind the sink, in the living room staring out at me from under the chairs, in the bedroom weaving webs across the top of the lampshade. I cannot bear to squish them and I cannot make myself get close enough to pick them up and toss them outside so they face death by suction. I have a creepy feeling that when I die, every spider I ever sucked up with the vacuum will appear, waving vindictive spidery arms and staring at me with buggy, spidery eyes.

As if the spiders and the gnats and the ticks and the bees and a myriad of other flying insects were not enough, each summer day that passes advances the impending July invasion of the deer fly. Insect repellent holds no sway against those vicious little winged teeth and anyone in doubt of the season will only have to look at my neck, where angry red lesions will appear like a penance necklace, to know that summer is really here.

I can’t help but exult in the green of growing things, take delight in the multitude of bright flowers and the golden warmth of the sunshine. I welcome the soft air and the clear blue skies, skip happily barefoot, and fling open the doors and windows the moment the sun appears over the horizon. Yet I will also go armed into the fray, covered in insect repellent, fly swatter and vacuum at the ready, on perpetual seasonal bug alert. 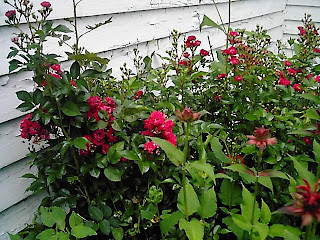 Several red reasons the bees are in season...
Posted by Pauline at 4:24 AM 6 comments: Links to this post

HHB asked her readers to look up at noon and post a picture of what they saw... 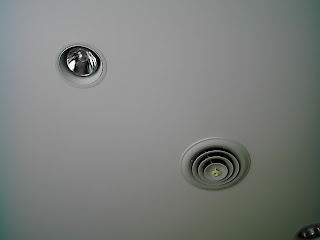 This is the ceiling of my office. At noon, it's what I saw when I raised my eyes from the computer screen I'd been staring at most of the morning. I write press releases for a non-profit in the summer and though the office is air conditioned and my workmates congenial, I went outside for another snapshot of... 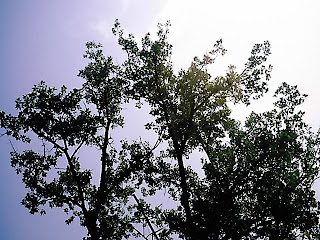 what I'd really like to be looking at on a weekday noon hour.
Posted by Pauline at 12:17 PM 5 comments: Links to this post

How Does Your Garden Grow?

I'm growing my own vegetables, riding my bike to work, and buying local - all those years as a back-to-the-lander in the 1970s and 80s is paying off now. I wish I still had my wood cookstove! 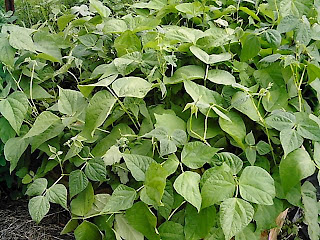 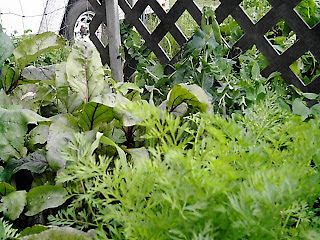 thinning the beets results in plates full of rich, dark greens. The carrots are nicely feathered and I've been eating peas for a week! 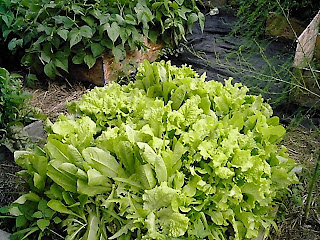 these are the salad days! purple potatoes all in a row. 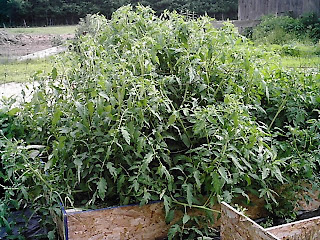 what tomatoes don't get eaten out of hand the moment they're picked will be made into stewed tomatoes or pasta sauce.

Barring bug infestations, hail, or drought, I should have enough vegetables harvested and jarred or frozen to see me through the winter!
Posted by Pauline at 6:38 PM 7 comments: Links to this post 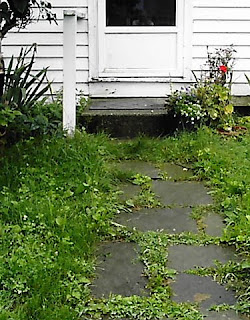 I’ve been thinking about paths lately. The one just outside my door was built by and for friendship. Made of slate donated by a friend who moved away, it meanders down the slight rise from my step, sidles along the dog fence, and rounds the corner before ending at my landlady, Eileen’s, back door. It alleviates the muddy track we’d worn in the yard between our two dwellings and gives my little cottage a fairy-tale appearance.

Like any number of paths, this one evolved over the past several months. I came home one day last year in early June to find my friend making a trail of small white stones in the grass. Piled around him were two-dozen slate slabs. Together we sorted them and laid them this way and that, working our way to the corner of the fence. We ran out of filler stone and slabs at the same time.

For a while, the path languished. I hopped and skipped to my door on the ones that were there until another day in mid-summer brought my friend with more stones and a few more slabs. By then, the hollyhocks that surround my cottage were reaching for the sky, their blossoms every imaginable shade of pink.

The finished path has become a magical thing, a connection of earth and stone and good intentions leading from my door to Eileen’s. More than just a walkway, it’s a declaration of affection, a composite of artistry and shared work that connects the three of us in a more subtle way than the obvious stones linking both doors. I can’t walk it without thinking of friendship.

Paths always lead somewhere. Beyond my slate walkway, at the far end of my yard, is what my granddaughter, Sophia, calls the Secret Path, a narrow trail through a small stand of woods that leads from my yard to my neighbor’s. You have to duck under the lower hanging branches and skip over the fallen ones, all the while dodging summer spider web strands or winter snow showers. Once on the path, you disappear from sight, as though some magic there made you part of the small forest. At the neighbor’s end is sunlight and a square sand pile bristling with Tonka trucks.

A path of convenience, this small connector has also become a place of enchantment. There might be a majestic spider web fraught with dew glimmering between two trees. Some small animal might dart in front of you. Some flower you hadn’t noticed before might be blooming in secret under the leaf mold. Standing in the green gloom of the trees, the glittering promise of sunlight at either end can make you catch your breath.

Paths are like that. You think you know where you’re starting from and where you’ll end up but the space in between can change you. A path that looks as though it simply leads from one place to another can be, in secret, a pathway to the heart. 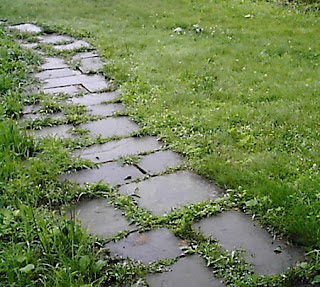 Posted by Pauline at 8:31 AM 11 comments: Links to this post

July 4th, 1776 is not the United States' real Independence Day. That would be September 3, 1783 when King George, defeated in The American Revolution, renounced all claims to the new country. The Declaration of Independence is really a "letter" to King George stating why America should be free from England, and it was dated July 4, 1776.


photo credit: www.history.com
Posted by Pauline at 3:09 PM 5 comments: Links to this post

If I have a purpose, it is to live fully— 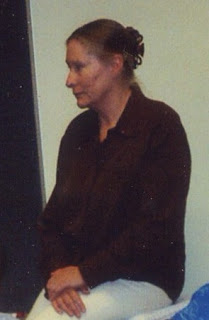 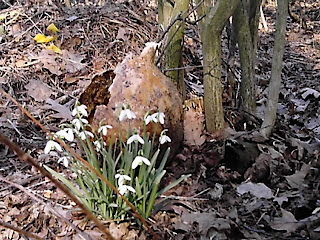 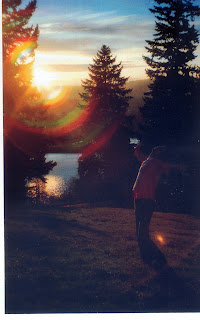 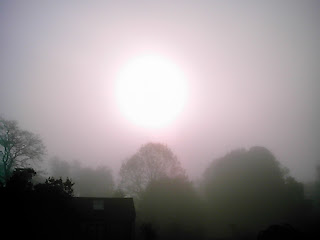 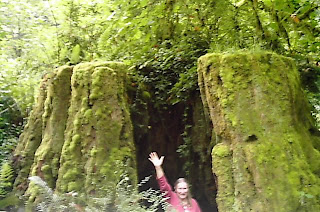 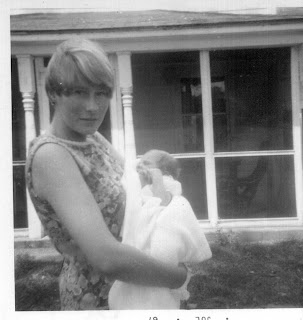 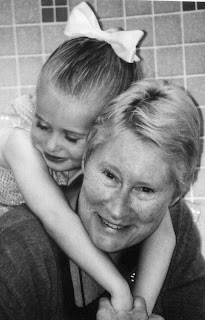 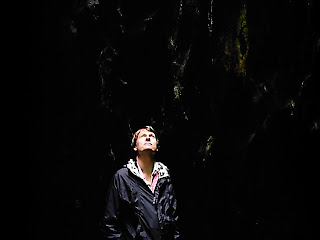 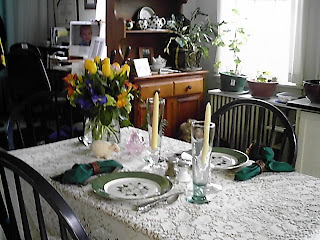 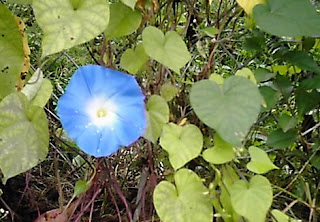