Advice From a Tree 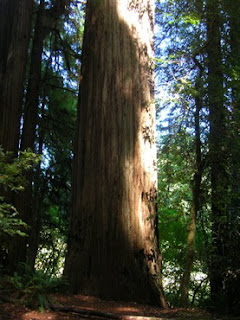 I've been a tree hugger since forever. A longtime friend once told me he thought I might have been a tree in a former life - me with my head in the clouds but my roots sunk deep. I found this piece on a wall in my sister's house and copied it down. Written by Ilan Shamir, it's worth sharing.

Advice From a Tree

Feel the wind and the sun
And delight in their presence
Look up at the moon that shines down upon you
And the mystery of the stars at night
Seek nourishment from the good things in life
Simple pleasures
Earth, fresh air, light
Be content with your natural beauty
Drink plenty of water
Let your limbs sway and dance in the breezes
Be flexible
Remember your roots
Enjoy the view!
Posted by Pauline at 3:56 PM 14 comments: 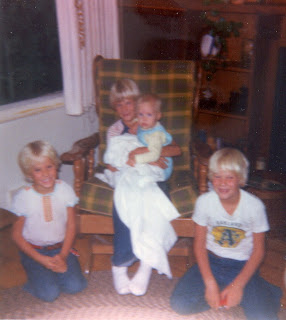 In response to the prompt, The Gift, from Writer's Island:


Brendan, my first-born, arrived on Father’s Day – an appropriate gift. He was a tiny, pink, frowning replica of his father. His head was covered with a thatch of golden curls and his blue eyes had the intensity of a summer sky. He would gaze at me so long and questioningly as he nursed that I would have to look away or cry. I loved him wildly. I still do.

He was an inquisitive child, and a happy one until the first day of school. I opened the front door at mid-morning to find him crying on the doorstep. He had walked the mile home from school at recess. His teacher called in a panic when she couldn’t find him. As I walked him back to school, he solemnly explained to me, “Six hours is far too long for a child my age to be away from his mother.” No kidding.

When he was seven, I put him on the bus to Boston with a chum from school. They were going to visit the friend’s grandfather and Bren was beside himself with excitement. I was beside myself with worry. In his suitcase I packed Sammy Sock, his favorite toy, thinking that it would help him be less homesick if he had something familiar with him. When he came home two days later, he confided that he had been having a wonderful time until he opened his suitcase to get his pajamas. Seeing Sammy made him so homesick he couldn’t sleep. It was an important lesson – never presume your child feels the way you do.

As Bren grew, he seemed to stretch. Always thin, he soon towered over me like a young sapling. I remember a day I was scolding him over some trivial thing. He looked down fondly on my upturned frown and said, “What did you say, Shorty?”

Incensed, I dragged a chair over and stood on it, forcing him to look up at me. The absurdity of it struck us both at the same time and we collapsed in a giggling heap.

My second son was born a year and a day after his brother. For the first two days of his lfe he was known as Baby because his dad and I couldn’t agree on a name. Finally in desperation I began reading aloud from What to Name Your Baby. When I got to Kenneth, I looked down at baby. He looked back and gave me a ghost of a smile. I didn’t care what we called him as long as I got to keep him. I loved him wildly. I still do.

Ken was a rugged little boy with a mop of yellow curls and a mischievous grin. He liked to move fast and climb high. When he was two I went into the kitchen one morning to find him sitting Buddha-like on top of the refrigerator. When he was five, a neighbor called in a dither because she’d seen him climbing among the branches of a huge pine in her front yard. I strolled over to fetch him.

“Hi Mom,” he called from his hiding place twenty feet up.

When he was old enough to get his driver’s license his standard excuse for a speeding ticket was, “But my car just goes too fast.”

Jennifer was born two months after Ken’s first birthday. Her hair was as soft as swan’s down, her eyes the color of violets. Her brothers adored her. I loved her wildly. I still do. She was enchanting – a butterfly child who sang to herself every morning while waiting to be lifted from her crib. One Christmas, my mother came to spend the holiday with us. She brought a miniature Christmas tree trimmed with blinking lights for the kids’ room. Before going to bed she plugged the cord into the socket. She woke to find Jennifer sitting on the foot of her bed, watching the lights blink on and off, on and off. “Isn’t it pretty, isn’t it nice?” piped Jen. We still say that when entranced by some unexpected beauty.

Jen loved being center stage. “Watch me dance!” she cried at age seven, pirouetting around the dance studio. “Watch me twirl!” she sang at twelve, throwing her baton high in the air. “Watch me do cartwheels!” she yelled from center field during half time. “Hear me sing!” she crooned, standing in front of a microphone at her high school graduation. Where did this extrovert come from, I wondered.

Cassie, the caboose baby, was as sturdy as Jen was elfin. She had the same golden hair and wide blue eyes as her siblings, and a deep, throaty chuckle. The day she was born, my father stood over her examining her fingers and toes. “Look,” he said, “at her perfect little fingernails, her perfect little feet. Every time, it’s a miracle.” I loved her wildly. I still do.

“Don’t see me Mommy,” was her favorite admonition growing up. She was an intensely private and self-reliant child. “Born old,” people said of her and it was true. She seemed to possess some ancient wisdom that gave her an enviable self-assurance. When she was thirteen, I put her on an airplane flight from Vermont to California where she was to meet my sister. From there they would fly down under, spending the summer backpacking through Australia and New Zealand. I got dizzy every time I imagined the soles of her feet meeting mine from the other side of the earth. “Dear Mom,” one bloodstained letter began. “I can write now that my cuts are almost healed…” Of the two of us, she was (and is) the one with admirable aplomb.

Because of them my life is enriched beyond measure. I loved them wildly. I still do.
Posted by Pauline at 3:39 PM 16 comments: 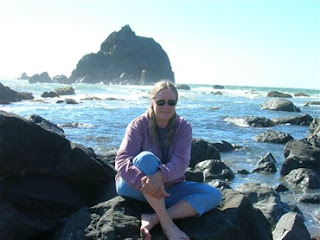 This comes from a comment by Jujee on Lee’s site.


1. Favorite past-time? I love reading, hiking, piloting a small plane, writing, planting things, drawing, painting, dreaming. Whichever of those I’m doing at any given moment is my favorite.

2. Favorite item of clothing? An old blue sweater I’ve had for years. I bought it twenty years ago when I moved back here to live. It’s warmed me during the chilly winter months, comforted me when I needed a hug and no one was around, and cuddled me when I was ill and needed cuddling. It’s frayed and mended and shapeless and it’s the first thing I reach for when I get home.

3. Favorite jewelry piece? I don’t wear jewelry. “Ever?” asked an astonished friend. “Mostly never,” I said, and it’s true. But I have one necklace from my children that I wear when I get gussied up and another from my mother when I have a formal occasion to attend, which is hardly ever.

4. Favorite month? Like the past-times above, my favorite month is the one I’m in. I love warm weather, rainy weather, blustery snowy weather, weather on the cusp of change, hot and humid weather. I’m terrified of lightning and cyclonic winds. Otherwise, I’m happy with whatever the day brings.

6. Favorite year at school? The last year of my masters degree – it was challenging and exciting and a time of furious learning. I loved it!

9. Favorite expression on self? Smile

10. Favorite expression on others? Smile

13. Favorite time of day? The hours between 4 and 7, both a.m. and p.m. The day is either beginning or coming to a close, and there is a pervading silent peace.
14. Favorite day of the week? Friday – the week is behind, the weekend ahead.

Fear Is the Backbone of Courage 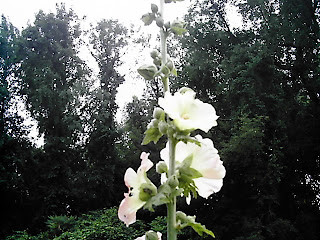 Poetry Thursday has become a traveling show. This week's theme was confronting fear. I chose to look at something other than my own...


Does the fear of not
blooming become a flower’s
reason for a stem?
Posted by Pauline at 4:55 PM 14 comments: