Last Day Before Returning to Work

is filled with happy activities like decorating packages for a baby shower... 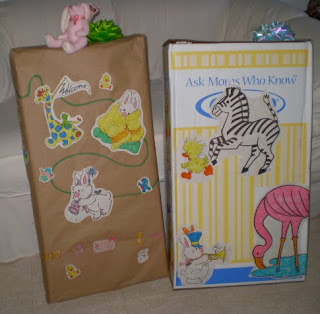 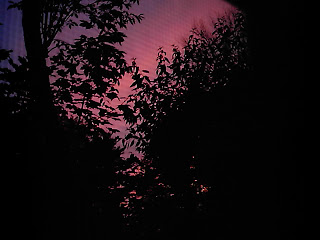 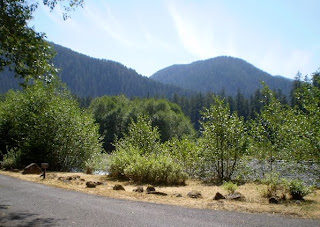 Son B and I recently spent several days camping at the Hoh River Campgrounds in Olympic National Park in Washington State. We woke in the morning sheltered in the arms of mountains and listened to the sound of the rushing river while we breakfasted amid tall tree shadows and dappled sunlight. Waking up to this view was to wake happy. We often put our chairs in the grassy spot in the foreground and ate our meals surrounded by beauty. It was an unparalleled dining room. 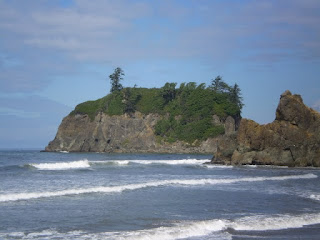 The Pacific Northwest is unlike the East Coast in many ways. NW ocean beaches boast more fog and wind, the land leading to the beaches is steeper; often mountains have their toes in the water. These are headlands at Ruby Beach, WA. 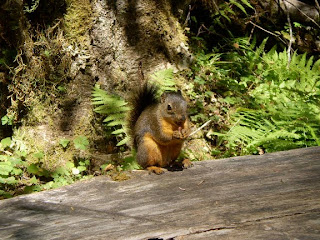 We hiked for miles daily into the temperate rain forest. We were not eaten by cougars nor frightened by bears. The closest we got to an elk, angry or otherwise, was a fresh pile of trailside dung. We did encounter this little fellow... 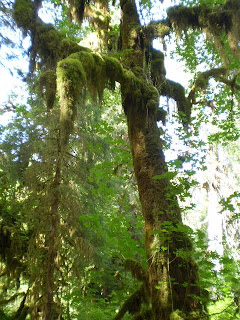 We followed the Moss Trail into Hobbit land. Most of the moss we saw was club moss that draped itself from the branches but one could see common witches hair and fairy barf if one looked closely! 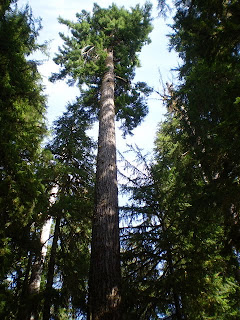 To see the tops of the trees one has to lean back and look up, up, up. Most of the old growth canopy reaches 100-200 feet into the air and some of the trees have been standing 1,000 years. The silence below is punctuated with the cries of jays and crows. Deep in the forest the hush is palpable and in some places is so Hobbit-like you expect to see Frodo step out into the path. 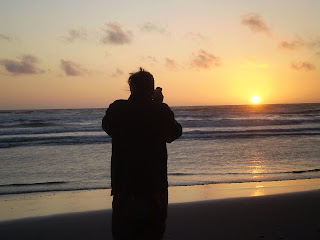 Every day was an adventure from sunrise to sunset. To be out of doors for the better part of each day, to cook and eat in the sunshine and soft wind, to watch the sun sink slowly into the water, to count the stars and wish on the moon before bed is to be aware of one's self in the world.
Posted by Pauline at 5:04 AM 16 comments: Links to this post

I am away tomorrow for Oregon and a week with my sisters, then to the Olympic Peninsula, where whales, dolphins, and sea lions feed in the Pacific Ocean while deer, elk, cougars, and bears roam the meadows and mountains. It will be a week of rumbling along west coast highways with my eldest son, a week of no phones, no computers, no civilization except for the kind folks at our nightly campsites. Back the 25th.
Posted by Pauline at 3:00 PM 20 comments: Links to this post

The Summer of Being Away

I feel as though I've hardly been home this summer. The moment school let out in June I was on the highway, speeding into summer activities. My oldest son came home for a visit from the West Coast. There were June birthdays, a weekend trip to Vermont, and days spent visiting relatives. I spent the first week of July taking care of a friend's house an hour from my own while they vacationed on the Cape. I spent the last week of July at my brother's house while they vacationed in Maine. It was not a hard job.

In the mornings I walked a mile up the road and back before breakfast. My days were lazy, spent tending my brother's small vegetable patch, flipping through magazines, splashing about in the pool. Evenings I rode my bicycle up West's hill and on past neighbor's houses, past the old familiar meadows and woods that marked my childhood. It was both exhilarating and nostalgic. My dreams were restless and peopled with those now gone.
Every night the sun sank slowly behind the mountain. I watched it kiss the tops of the tall corn leaves and bless the trees as it departed, trailing banners of pink and mauve and gold-tinged purple as it set.
Now I'm home again and catching up on my own garden. Many of the cucumbers found their way into jars of pickles that will taste of summer on a winter's day. There are beans in the freezer as well as Swiss chard and eggplant.
I will be here until Thursday and then I'm off to Oregon to visit family there. When I return, summer will be over, my fridge will be full of tomatoes to jar, and school will be starting. My summer seems to have sped along as fast as the writing of this post!
Posted by Pauline at 5:46 AM 13 comments: Links to this post