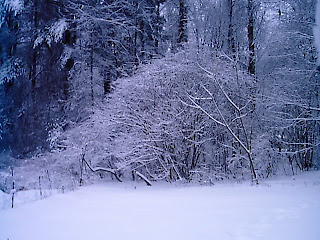 This year the lawn is greeny-brown and dry. Last year's flower beds are a mass of broken stalks and weathered leaves. We had a brief snow squall on the 7th and an ice storm in the middle of the week that had New England towns declaring themselves states of disaster. Ice coated tree limbs downed power lines, and at one point, more than a million homes were without electricity. The temperature dropped down and the wind picked up. The weather map showed fingers of pure rain, as much as three inches falling in an hour, reaching down between the sheets of ice elsewhere. My town was in one of those fingers. We had a few flooded roads but never lost power nor saw a bit of ice, while the mountain behind the house was coated in frozen white. 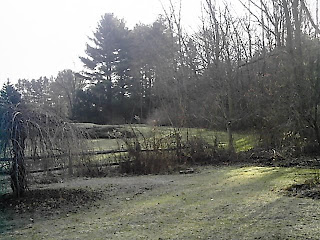 Last weekend snowflakes swirled around my head like flurries of small white birds as I hunted for just the right tree to put on my coffee table. My cottage is so small that I must find a tree with a crooked bottom but a perfect top, undesirable to the hordes looking for tall, straight trees. I found one and brought it home. I hauled the box of Christmas ornaments from the back of the closet, strung colored lights among the branches, draping tinsel over all. Unfortunately, there wasn't enough of a snowfall to so much as whiten the lawn. 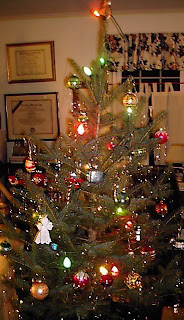 Here my mother and her father get ready for Christmas. In the 1930s, lead tinsel cost 29¢. Cut straight at the edges and falling a good 14 inches or so, the tinsel was a far cry from the flimsy, crinkly stuff of today. When I was a child, we used lead tinsel. It's still available on ebay. 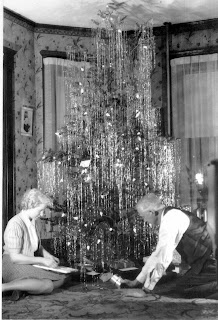 This year, as in the years since my grandchildren were born, I will travel to their house on Christmas Day. The three of us are hoping that before I leave, the season will once again look like this. 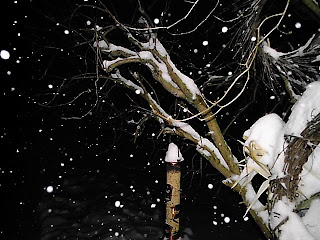 Ah! The joy of the sights and the sounds and the memories of past Christmases and the future that provide the comfort of peace and love in our hearts. What a nice reminder of this time of year.

One of our biggest arguments when I was growing up was whether to hang the tinsel one strand at a time or to throw it on the tree. I was inclined to throw it, probably because that's the way my friends did it, but inevitably my mother won out and it was carefully hung.

For you, I hope it snows. Here the temperature on Xmas day can be anywhere between 55F and 100F. (December is not our most stable weather month.)

I hope you get your snow. We are, as Lee says, likely to get one extreme or the other. I am hoping it will be the cooler end of the scale, minus the humidity.
I love the photo of your mother & grandfather. but Lead?? a danger surely!

pauline, perhaps I'm more imaginative than anyone else, but what is that in the lower right-hand corner of the last pictue that looks so much like the face of an elf, grimacing from the cold, with a many-pointed elf-collar around the neck, a pudgy nose, and one pointy ear showing under a toque toppled to one side with a funny pom-pom on it.

As to the other part of your discussion, I didn't know that tinsel was lead - but those icicles were so beautiful!! And angel hair made Christmas lights glow like frosted clouds. No more of that either - apparently it was made from fiber-glass. Come to think of it, I really liked lead and fiber-glass.

Thank you in turn Dave - you always leave the most thoughtful comments!

Barbara - I still hang my tinsel strand by strand.

Thanks Lee - I hope so too but it doesn't look promising...

It was called lead tinsel Meggie but I'm not sure exactly what it was made of. Besides, back then we weren't informed about the dangers of lead.

Roberta - I see that elf too now that you've pointed him out but I have no idea what he's doing there! I think underneath that strange little hat is a corn husk arrangement - the leaves poking out look like dried corn leaves. But why that would be in the lilac, I have no clue...

we have your snow! the girls have had four unexpected holidays this week, as a result of it. at the moment they're happily playing with some of their friends and some of the parents to whom snow is still an almost miraculous event. I like snow, in small doses, but after a few decades in saskatchewan, where the seasons are winter, almost winter, the remains of winter, and an all too brief summer, I'm happiest seeing it fall from the comfort of our snug little brown house. (but I'll go out in a bit, once I've gotten a bit more housework done. important company coming. the house is full of plaid and santas and warm blankets, pine branches and coffee-filter snowflakes taped to the big living room window.)

hope you're well. the girls say thanks for the snow.

(wv: flavis. made me think of mavis, of course, though I've never known a mavis.)

Shara - the snow is on its way! By this time tomorrow night (7:15 p.m.) we should have more than a foot of white stuff. Hooray!

That's so awesome, I love the pictures and wow the one of your parents, what a treasure.
Your tree looks great!!

I love your warm little tree with the old lights! We called tinsel "icicles" and we both threw and hung!