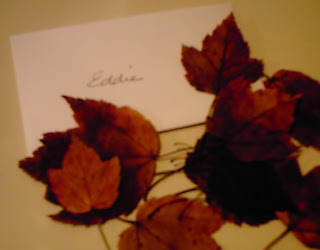 Dawn followed close on the heels of the clackity boxcars, as if the train’s whistle had wakened the sun as well as my self. I stood on the doorstep in the cool, misty half-light watching a flock of noisy geese make its way to the pond. They are Canada geese winging down from the north. They will rest on our pond and eat their fill before pushing south to Maryland just ahead of the cold November winds. September weather has remained warm and muggy after a summer of heat and humidity. Even now, toward the month’s end, the sun still blazes and the temperature climbs into the 80s. Evenings cool a little but the dampness remains. The trees still wear their summer green, though here and there a few anxious maple leaves have gone scarlet. It is these leaves that lure me out on my bicycle to scour the roadsides for enough to send to Eddie.

Eddie used to live here in my town. We grew up together half wild, playing along the creek banks, the edges of the woods, and the broad meadows between his house and mine. Eddie had a pony and sometimes he rode that to my house. Other times we rode our bikes together down the road we shared. He lived at the southern end and I half way to the north end. Often after a day of play, I would walk Eddie nearly to his end of the street. He’d walk back with me as far as the brook near my house. I’d walk him to the railroad tracks, and he’d walk me back to the halfway mark – a chicken farm owned by an old maid and her widowed sister. Then we’d turn and wave as we made our way to our respective houses. It made our time together last longer.

Once we were in junior high school, Eddie and I went our separate ways, me to the local regional school and he to a private one. We saw each other infrequently until just a few years ago when he made a trip home from Kentucky where he’d finally settled. At first I didn’t recognize him. It had been so many years, after all. But then he laughed and the years fell away, and we began to talk as though it had been only yesterday that we’d walked each other home.

Now we keep in touch by mail, with me keeping Eddie abreast of changes large and small to the town he grew up in. He writes back, nostalgic notes filled with questions about people and places he once knew well. He promises to come home in the spring, and then in the summer, and finally, when the leaves turn color and fall in heaps and the wind from the north develops a bite, he promises that he will come the following spring. I’ve ceased looking for him. I can’t help but think of him though, as I pedal slowly down the road where his grandfather once had a farm. Lettuce for fancy local restaurants grows in the fields now and the old farmhouse stands empty, shipping crates piled on its sagging porch.

The maples that line the street drop orange and scarlet leaves at my feet. I scoop them up, iron them between sheets of waxed paper, and mail them off to Eddie. Perhaps they will lure him home. Perhaps in the spring.
Posted by Pauline at 4:27 PM

Ah Pauline, How we love our friends. Even if they never visit, the connection remains.
what a lovely post.

How wistful the tone of this story is. I hear a note of longing for a path that might have merged sooner rather than later, only to divide again. I read this and get a bit of a glimpse of how my own husband may feel as he maintains connections with those in his small hometown far away.

i read this and felt a bit sad. i know how tentative time really is and hope that eddie doesn't one day regret the delay. unexpected things come up in life, for sure, but often we have to make a place in our lives for the things we want to do. here's wishing eddie finds his way home again, both to the place and the friend.

Sad and Romantic at the same time, I loved it!

I got an email from Eddie:

"Maybe in the spring. I really HAVE to come home!"